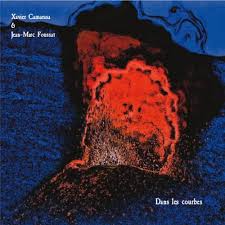 If my musical tastes often enough veer from the mainstream, I do not see it as my problem. It is a problem with the mainstream. Why is it that Modern Visual Art/Performance Art can regularly be covered by the mainstream art media, collected by the coterie of wealthy art patrons without complaint, installed in many of the world's most prestigious museums, yet music of a similar advancement is generally disdained, ignored or just plain reviled out there. I seek to redress that in my coverage of the new as well as the not-so-new. If it leaves me in poverty, at least I know I am doing a good turn for the art music scene today.

So today's offering in within that realm, music that is on the edge such that my housemates have their doubts about my sanity or alternately think there is some horrible cataclysm taking place in my living space. What we have is thoroughgoingly adventurous sound sculpting avant fare from pianist Xavier Camarasa and electronic music master Jean-Marc Foussat. The album is entitled Dans les courbes (FOU Records CD26).

What makes this program something superior and musical valuable is the freely articulated sonic understanding both artists bring to the table. The piano becomes almost an electronic vehicle; the Synthi AKS take on an almost pianistic demeanor. Of course that is only so in a sympathetic vibrancy sense. And yet there are much of the time contrasts that have a two-fold independence yet "go together" in non-cliche sorts of ways. The point is that there is an ever-shifting matrix of almost seamlessly cohesive noise and tone poetics that has a narrative quality and a continuity, yet a two-fold distinctiveness perhaps not as often found on the edges of free-new music as it might be.

Plus the sound melds are very musical as well as sonically alive with unexpected confluences.

I keep listening to this one. I keep coming away from it with an ever-increasing sense of satisfaction. That to me is a sure sign that this is avant sonancy of importance.

So not surprisingly I do suggest you dive into this music--provided you are unafraid of the untrammeled and genuinely NEW.

Posted by Grego Applegate Edwards at 7:23 AM